Our Experience with Steam Greenlight

So as of today, Code 7 was greenlit by Steam and we couldn't be happier. If you don't know what Steam Greenlight is, it's the pathway for little indie studios like us to get their games on the biggest video game sales platform "Steam". You have to open a game profile, show your screenshots and videos and let the Steam community vote if they'd buy the game. It took us 60 days and about 900 "Yes"-Votes to get through. Here's the problem though. The message came at a time when I had thought that I understood what our goal would be and that we'd need at least another two months to reach it. 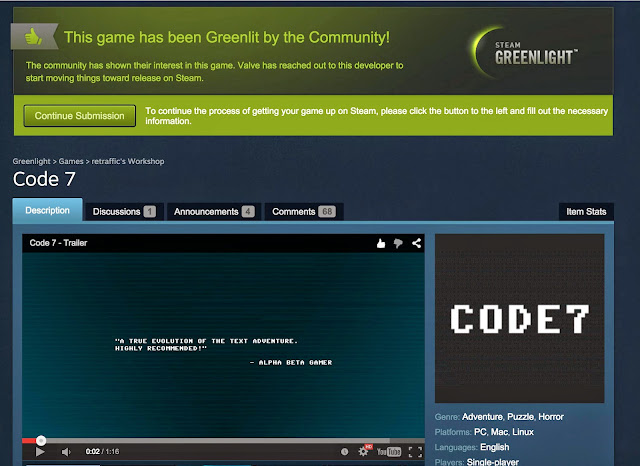 There's a lot of texts written about what your game profile needs to get through Greenlight. About one year ago it had still been about 18k Yes-Votes, which changed in 2014 to getting into the Top 100 and hoping for the best, which would still not be a guarantee to get through.

So i thought our goal would be to get into the Top 100 and then wait for Valve to notice us. On the Statistics Page there's always a big percentage shown how much of the way to the Top 100 we had already left behind us. So the percentage slowly rose over the months and finally reached about 50%, then 51%, then 52%, then got back down to 50%. So we were kind of stuck at that percentage and would have needed a new impulse for people to vote to get through. 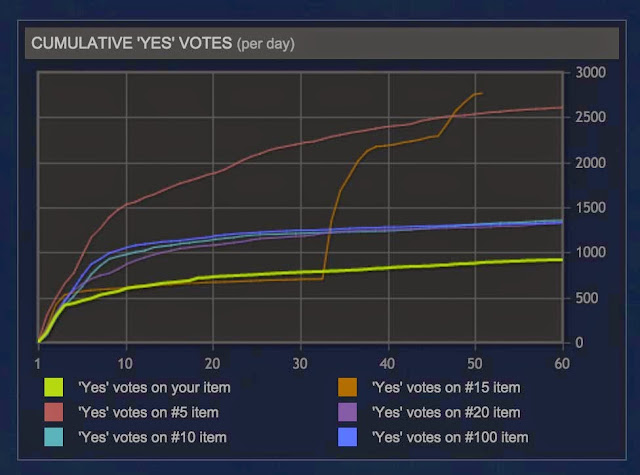 In addition you also get these fancy statistics, which show you how many votes the items in the Top 100 have, so you can at least anticipate how many more votes you need to get there. In this case most items have about 1500 votes and the top 5 spot has about 2600. The top 15 spot has actually more than that - about 2800. And the Top 10 Spot is in the bulk with the others at about 1500. So it seems the "Yes"-Votes alone aren't accounting for the position in the Top 100. But what else is? 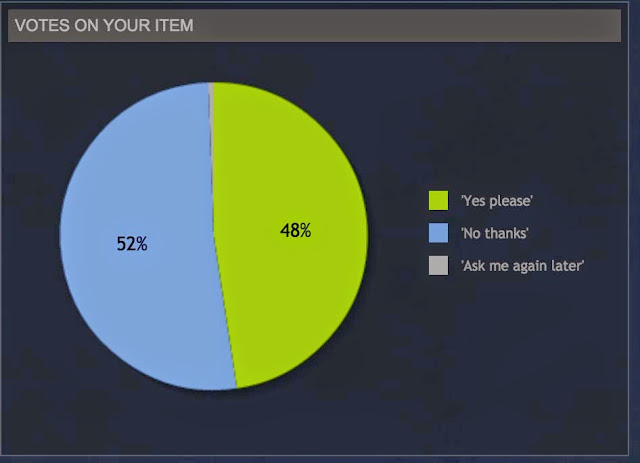 Last but not least, you get a graph that shows you how many "Yes"-Votes you get in comparison to "No"-Votes. While you may think that it's bad that 4% more people voted no, you should look at the overall statistics for all the games in the Top 50.

Actually the average ratio for those games lays at about 28% "Yes"- to 72% "No"-Votes, which I think mostly makes the community look bad, because these are supposedly the best games on there. In the end we can almost be happy about the fact that we got almost the same amount of "Yes" and "No" votes.

However to me, the community is the best thing about Greenlight. If you get through or not, doesn't really seem to be connected to any of these statistics, because shortly before we got greenlit we were only about 56% of the way to the Top 100 and therefore - as mentioned before - thought it would take a while. The response of the community however was what really made this profile worth something. 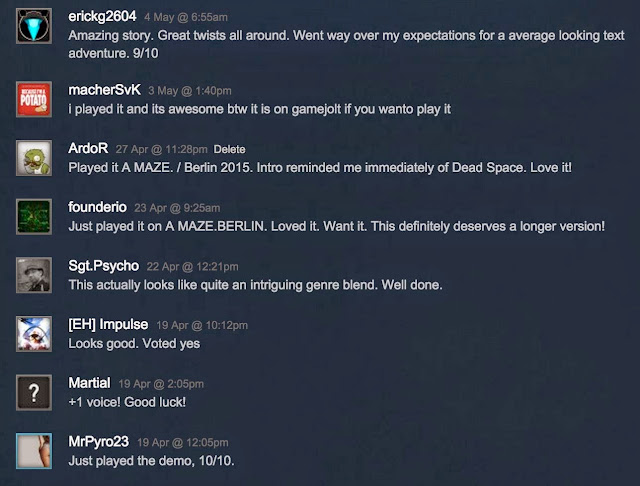 The about 70 comments on the page were almost all very positive.  So here's what I'm taking away from Steam Greenlight:

If your product is good, don't worry about getting through. You will get greenlit eventually. Nobody will be able to predict how long it will take anyways. Instead, focus on the people and hear what they have to say. Stay active. Write announcements and discussions and show your game as best as you can. What comes after could be much more terrifying - trying to actually sell your stuff.

We're of course really excited to take that next step and go on working on the five episodes that we'll try to bring to Steam next year.
Eingestellt von Kevin um 00:31